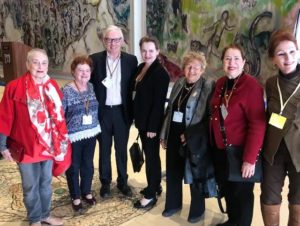 On 15th January 2020, Members of the IAUW Israeli Executive Committee welcomed Dr. Anne Negre, President of University Women of Europe and member of the French Association of University Women (AFFDU) in Tel Aviv, where she was invited to attend the Scholarship Ceremony Award for female students.

After visiting the Holocaust History Museum and World Holocaust Remembrance Centre Jerusalem, were she was greeted by the Director of the complex, Dr. Anne Negre and members of IAUW visited the Knesset – the Israeli Parliament, the unicameral national legislature of Israel and met with Orly Almagor Lotan, team leader and research specialised in women’s rights at the Knesset Research and Information centre. Anne was given the Chair and compared the Israeli and French systems, which she found to be quite similar. She explained that problems of the status of women in France is one of the issues in which she is most involved.

Back to Tel Aviv they joined a candle-lighting ceremony to welcome in the Sabbath at “The Children’s House” a home for children displaced by court order. Women of IAUW are volunteering and mentoring the girls in there, helping them building self-confidence and guiding them to achieving their goals. Thanks to President Yemima Gabay and Deputy President Ora Sharon,  Anne enjoyed traditional dinners and warm hospitality.

On Saturday, she went to the North Galilee to visit a special school for autistic children, then she met an Moslem lady Zina Suved who works towards to co-operation and communication between Arab and Jews. Two of her family served in the Israeli army. 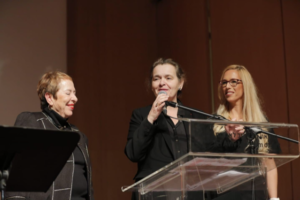 Sunday a working day in Israel, the visitors went to Weizmann Institute an outstanding multi research centre. Then, in the evening, Dr. Anne Negre together with the Mayor of Tel Aviv were guest of honour of a fund raising gala and scholarship awards for graduates of Tel Aviv branch’s mentor program run by Shiri Malca, Vice-President for Membership and Chairperson of the Tel Aviv Branch of IAUW. The evening was grandiose, entertaining and emotional. About twenty scholarships were awarded and the winners were cheered on by their supporters who filled up all the back seats of the auditorium at the Tel Aviv Museum. Besides the emotions involved, it was amazing to remember that the revived Tel Aviv branch of IAUW has only been functioning for the last three years.

Hats off to those energetic and talented university women!