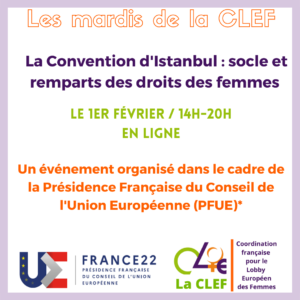 La CLEF (French Coordination for the European Women’s Lobby) is organising the online conference «The Istanbul Convention: foundation and defense of women’s rights » on Tuesday, the 1st of February 2022, 6-8 pm CET (UTC +1).

This event is organised within The French Presidency of the Council of the European Union (FPEU) * in partnership with The University Women of Europe (UWE).

The conference will take place within the monthly conferences “CLEF Tuesdays”.  It will be a webinar on zoom, open to up to 500 participants with free and compulsory registration. An English translation will be available to non-French speakers.
It will take place in two parts of 45 minutes each, the first presenting the Istanbul Convention (the Council of Europe Convention on Preventing and Combating Violence against Women and Domestic Violence) and the second focusing on the role of the EUFP in developing the scope of this fundamental international treaty for the rights of all women.

The conference will be moderated by Dr Anne Bergheim-Nègre, President of UWE and Past Vice-President of the Conference of INGOs of the Council of Europe in charge of Gender Equality.

Jocelyne-Adriant-Mebtoul, President of La CLEF, Founding President of Femmes du Monde et Réciproquement and expert at the International and European Affairs Commission of the High Council for Gender Equality.

First part : The so-called Istanbul Convention of Council of Europe Convention on preventing and combatting violence against women and domestic violence

– Claudia Lam, Director of Dunka Mijatović’s cabinet, The Council of Europe Commissioner for Human Rights
– Johanna Nelles, Executive Secretary of the Monitoring Mechanism of the Istanbul Convention (GREVIO) [to be confirmed]

Second part : The role that the FPEU (French Presidency of the European Union) can and must play to consolidate the scope of this essential international treaty for women’s rights

– Marie Fontanel, President of the Committee of the Parties to the Istanbul Convention – Delphine O, Ambassador, General Secretary of the Generation Equality Forum 2021 in charge of its follow-up
– Claire Fourçans, Policy and Campaign Director, European Women’s Lobby (EWL)

Nicole Ameline, Former Minister for Parity and Professional Equality (2002-2005), former Chair and Vice-Chair (2013-2020) of the Committee on the Elimination of Discrimination against Women (CEDAW).