December 12, 2022
|
No Comments
|
Uncategorized
When women still had to fight hard to get into university, in 1922, the Viennese Romance scholar Elise Richter founded the VAÖ in Austria. She was the first woman to habilitate at an Austrian university.
To mark the anniversary, a large, high-profile academic celebration was held at the University of Vienna on October 22, with guests from corresponding associations in Europe. Issues of gender justice and peace efforts by women were highlighted.
The keynote speech was given by Silvia Ulrich, University Professor for Legal Gender Studies, Diversity and And-Discrimination Law at the Johannes Kepler University Linz.
A look back to the beginnings 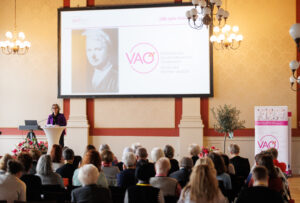 “On May 14, 1922, the Wiener Tagblatt published an appeal ‘to all women who have taken final examinations at university or at a state institution of higher education recognized as equivalent’ to form a non-political association for the networking and promotion of female academics,” Lena Diemerling elaborates in her master’s thesis on the development of the VAÖ. This laid the foundation for the VAÖ. At that time, similar associations already existed in the USA and Great Britain, and Elise Richter was in active contact with her colleagues there. 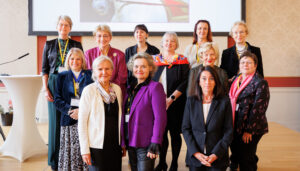 But is there still a need for an association of female academics today in view of the large number of women with academic degrees? VAÖ President Maria Tiefenthaller says ‘yes!’ “It is important to maintain what has been achieved and to continue to demand equal status for women, to point out open issues and to take a stand on them, and also to courageously tackle ‘taboo subjects’. Equal opportunities for top positions, these are goals that have not yet been achieved.” That is why VAÖ sees it as its mission to support women and female students with scholarships and in their interactions with each other. VAÖs global network provides international contacts – and often lifelong friendships result. The members of VAÖ have been involved for decades as representatives of GWI at the UN in Vienna. In addition, VAÖ is also part of University Women Europe (UWE), President Anne Bernheim-Nègre attended the event.

Univ.-Prof. Dr. Gabriela Hauch: “It took a long time until free access to the university.” 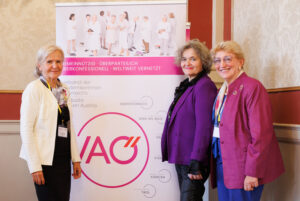 Gabriella Hauch, University Professor of Modern History/Women’s and Gender History at the University of Vienna, opened the academic part of the conference. She recalled the long journey until women had equal access to university studies. At the University of Vienna, this has theoretically been the case for 125 years – but for many years this was by no means true for all subjects. There was also the threat of political and racial discrimination. In view of the current global crises, Hauch appealed to further promote the sciences and develop instruments to ensure a good life for all. “This can only happen in a gender-equal society – and thus a women-friendly one.”

Keynote speaker Silvia Ulrich, Institute for Legal Gender Studies, noted that despite constitutional gender equality, it is important to see equality as a process in which gender justice must always be renegotiated and repositioned. “When we take stock, we can see that much has been achieved – largely through the commitment of so many pioneering women before us.” But there are still many unfinished “building sites,” she said. Today, women are under additional pressure from movements that are pushing back against women’s emancipation. But, Ulrich said, “equality, freedom from violence and self-determination are the unshakable foundation for gender-equitable living conditions.”

Click here to view the pictures of the event