What Can We Do for Women and Girls in Afghanistan?

Help Us Spread the 500Days of Oppression video campaign 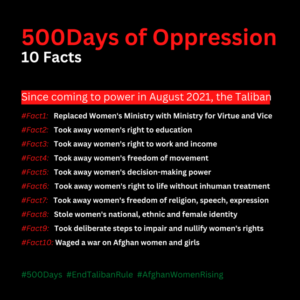 The 28 December 2022 marked 500 days since the Taliban took power over Afghan peoples. Since then, they have jeopardised every aspect of Afghan women’s rights.

Since August 2021 the Taliban has violated the Afghan constitution and international human rights law. It broke all its promises by engaging in systematic discrimination and violence against Afghan women. Many Western politicians pay lip-service to Afghan women, while, in reality, they either take no position towards the Taliban, or have tacitly supported it through political negotiations, transactions and visits. As a result, the Taliban acts with more and more impunity, being directly or indirectly validated and empowered by the world political leaders.

The 500 DAYS OF OPPRESSION campaign presents 10 simple facts about the reality of Afghan women and girls under the Taliban => watch HERE.

Find all that you can do to support the campaign in 2023 => https://www.migrantwomennetwork.org/afghan-women/.

Register in advance to participate in this powerful conversation hosted with Guest Speaker Fawzia Koofi HERE. 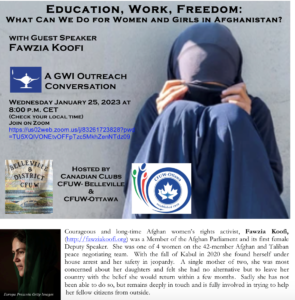